If you are anything like me you may feel a little nervous about Ben Stiller “trying something different” – we all saw Adam Sandler try it with Click, and most of us put our head in our hands and wanted him to go back to being the goofball we all love (or hate).

To add to the nerves we have the hype – I am not sure if you have noticed, but this film seems to have been hyped up like crazy – I have seen a 5 minute long trailer while at the cinema a few weeks back, including a plea from Stiller to come and watch it, not sure if that is cool or not. Probably not.

So, it was with trepidation that I went to this movie, ahead of release…

So what is it about? It is about a guy, Walter Mitty, sometimes he likes to zone out and imagine scenarios where he could act differently, be more adventurous, or desirable. We start to “get” Walter while he ponders over a dating site, gearing himself up to “wink” at a lady that we later find out he works with but is too shy to approach. When his “wink” function will not work he calls the agency to complain.

What unravels is how unsatisfied Walter is with his life, how he doesn’t even have anything to fill out the field “things you have done” on his profile. Walter had plans, he was going to travel the world! But then his Dad went and died and left him with his Mum and sister, and I guess Walter’s life just went on hold, and never started moving again. Instead he becomes an escapist who can just zone out and imagine what it would be like to be someone else.

But, that comfortable dull life may have the injection of adventure that he needs when his job and the job of many colleagues comes under threat, throwing him into the world he has always created in his head, but this time for real. 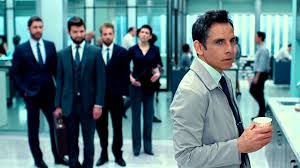 So does Stiller do this well? He manages to keep enough humour to pass as a comedy, the adventure box is ticked to a degree, but I think I expected more thought provocation, for it to be more of roller coaster of emotion, you laugh, you think, perhaps even cry, then laugh again. Sure there were moments where your heart warmed a little, but perhaps I was expecting too much?

Adam Scott plays the annoying, cringeworthy douche as well as he always does, this time sporting a equally annoying beard in the process, causing you to dream of Will Ferrell popping up and punching him in the face all over again. Kirsten Wiig plays the love interest, this time a little more reserved than her other roles, but predominately the film is based around Stiller, the rest merely supporting, although it is good to see Sean Penn playing an elusive photographer and the cause of Walter’s direction change.

It certainly was different from Stiller’s other movies, it is certainly worth a watch, and it was enjoyable, but I think they need to cut the 5 minute trailer, and not over hype it, that way perhaps the audience can enjoy it more for what it is, rather than what they being told it should be.

← Top Movies for Christmas
Paranormal Activity: The Marked Ones – review →