We have had a year of big science fiction films (Oblivion, Elysium, Pacific Rim) and as we near the end of that year, we get Gravity. We think they saved the best until last.

This film was created with such dedication that if there is a God, perhaps he finally decided to join the film industry. Never have I watched a film set in space and been transported so visually. Alfonso Cuarón, manages to create the perfect environment required to become completely absorbed and from the very first shot the film sets a breathtaking scene which pulls you right in. From this moment you realise that 3D is a must when watching this film, there is no doubt. There are films that are enhanced by 3D and then there is this – a film that becomes real with 3D, and surely this was why 3D was invented for the screen?

The film begins with 3 astronauts carrying out some routine maintenance to the Hubble telescope, 2 of these include veteran astronaut Matt Kowalski (George Clooney) and rookie Dr Ryan Stone (Sandra Bullock), on her first mission to space. Within minutes their calm, serene environment is thrown into disarray of fatal proportions by a chain reaction of space debris caused by a Russian missile strike on a defunct satellite, which causes debris to strike their space shuttle and cause Dr Ryan Stone to become detached and send her tumbling into space.

What begins here is so much more than a mission to survive the immediate situation…..

This is a film that lets you decide how deep you want to go… I have to say, I went pretty deep. The power of this film is expressed on so many levels, the main one being the significance of Dr Stones empowerment and rebirth. Having lost her little girl a few years before, we get the impression that she hasn’t really lived since that moment, but merely existed. But now she has a choice, she gets to choose to fight to live or accept her fate.

From the minute we see the moving shot of Bullock floating in the foetal position after undressing when she reaches the ISS, we see the weakness and vulnerability of her character, and that is the very start of her rebirth. Before she can be reborn she needs to let go, and learn to live, which she may never have chosen to do if she had not been faced with the choice of her own life or death. 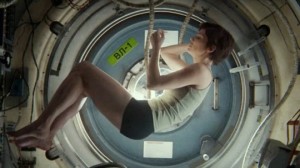 The film is paced perfectly, we have both pockets of calm and waves of action, all sharing moments of tension and emotion. The most tense and emotional being a beautiful scene where Stone seems to accept her fate. Communicating with an unknown man speaking a different language on the radio waves. While he is singing to his child, Stone appears to give up, and lets the lullaby wash over her as she clearly remembers her own loss and mourns one last time. This scene is one of the most powerful heart wrenching scenes of the whole film. Yes there were tears.

This is by far Bullocks best performance to date, to hold together a whole film almost by yourself is no easy task, but not for one minute are you conscious that this is what she is having to do. Instead she draws you right into her nightmare and in turn into her dramatic poignant rebirth and first breath into a new life……